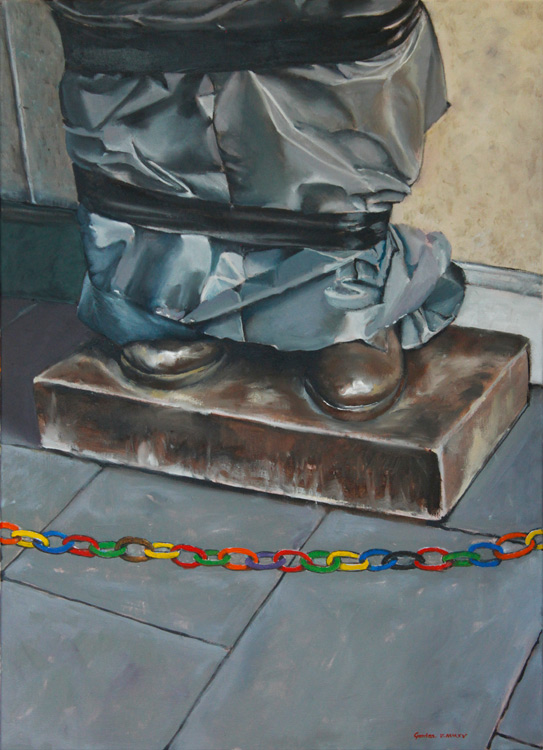 ANZAC – Whatever happened to ‘Let silent contemplation be your offering’[1]
Why there is no visual arts protest against Australia’s perpetual involvement in violent wars.

Four years of nationalistic fanfare and [trump]eting adulation of Australian military prowess and the sacrifice of the Anzac soldiers of World War One, reaches a significant milestone on the day of remembrance – 11th November 2018. The day that was dedicated to the cessation of hostilities in the ‘war to end all wars’ one hundred years ago was at best wishful thinking. This was merely the prelude to the bloodiest century in recorded history.

The financial cost to promote and celebrate our war-cult industry has been in excess of 320 million taxpayer dollars channelled through the Australian War Memorial. Additionally it is estimated that a similar amount has been raised from other sources, such as the Returned Services League (RSL), making an estimated total of over $600 million. It is notable that a major source of RSL revenue (one of the main contributors) is effectively extorted through pokie machine gambling in their extensive network of Clubs countrywide, by preying on the elderly, the lonely and the vulnerable. Ironically and perhaps even cynically this tainted revenue has been spent to honour the blood sacrifice of Ozzie diggers. In total this is an inordinately large sum of money expended on (capital C) celebrating instead of (lower case c) commemorating and glorifying our involvement in war. And this public relations expenditure pertains to only that one war. But in terms of current annually budgeted amounts expended by Australian governments on the military, this is just a drop in the ocean.

Back in 2015, one hundred years after the fact, the government sanctioned Anzac cult was being squeezed for all it was worth. Patriotic Jingoism in Australia reached fever-pitch at the centenary of the Australian (and others’) ill-fated invasion of Turkey at Gallipoli in April of that year. To sanitise the murderous violence of invading another country’s sovereign territory, it is euphemistically referred to as the Gallipoli Landing (for popular consumption). This backward-looking tied-to-death cultural nationalism is decidedly weird and unhealthy when one seriously considers it. With the benefit of historical hindsight Australia’s volunteer army were simply the guileless lemmings of Empire.

In Orange NSW, as elsewhere, new no-expense-spared non-contemporary archaic replicas of patriarchal memorials were commissioned. To emulate the aesthetic standards of a hundred years ago and re-produce what are patently anachronistic bronze Anzac diggers was inappropriate (in 2015). As art works they are way beyond-their-use-by-date aesthetically inept renditions, but qualify as expensive re-enactment simulations.

To make matters worse, commissioned artist Julie Squires crafted the $176,000 sculptures to appear almost identical to the earlier period larger-than-life sailor and soldier erected at the Cenotaph at Martin Place in Sydney. While here in Orange they have been made life-size and thus appear diminutive. Clearly the fundamental lesson from Realistic Figure Sculpture 101 that to obtain the effect of being life-size, they need to be somewhat larger in scale has not been comprehensively understood, absorbed or applied.

I painted this image as a riposte of protest to this senseless and wasteful inanity.

The pre-unfurling Christo-like moment inspired a re-evaluation of the notion of Anzac commemoration vs popular jingoistic sentimental celebration. The cheap plastic wrapping doubles as a body bag and the phallocratic sculptures might even at a stretch, reference the resurrection. The quasi-religious nationalist fervour with which Australia reveres Anzac death-cult sites, the cenotaphs, occasioned this hallowed area to be appropriately cordoned off. But in my rendering the chain is made of Lego-type multi-coloured plastic chain links – its boys and their toys again, back in the patriarchal sand pit.

I purposely floated the base of the bronze warrior to the centre and upper plane of the picture to impose my alternative slightly elevated focal view of gravitas vs. levitas. I paid particular attention to realistically simulate the complex detail of the plastic wrapping, with its restraining black tape; to be clearly recognisable as contemporary and quotidian[2]. Peeking out from below the ‘body bag’, are a pair of polished military boot-caps. My motivation was to prompt some reflection on the relevance and meaning of these monuments today. By covering-up that-which-was-about-to-be revealed, I endeavoured to metaphorically make the underlying political intention transparent.

There has been no attempt, in these out-dated sculptural reiterations from a past age, which have popped- up all over Australia, to reassess (and perhaps permanently consign to history) the very relevance of Anzac itself, in our much-altered contemporary multi-cultural society. In this particular case in Orange NSW and other similar glorifying monuments to war, there is no nuanced critical interrogation of the historical process over time, or any re-evaluation of the unhealthy attitudes inherent in worshipping our War dead in this self-perpetuating culture of nostalgia. Philip Deery and Julie Kimber hit the mark when they wrote that, “Memorials should engage people with a debate about the past, not serve as institutional sacred sites for state-sanctioned narratives.”[3]

The creation and perpetuation of the Anzac myth was the brainchild of dedicated individuals. Chief among these was C.E.W. Bean who wrote the epic official twelve-volume history of the war. Thanks to these few (over-zealous but perhaps well-intentioned) initiators we still have a thriving Anzac Industry over a hundred years on. Our Australian Mr Bean has a lot to answer for – and none of it is funny.

Just announced is a taxpayer-funded bumper $500 million extension to the Australian War memorial over the next few years. It is not enough that current visitors to the Australian War Memorial are subjected to experiencing war-like simulations in quasi-theme park arenas. New avenues of remembrance are to be explored. In justifying this new expenditure the director grandiloquently assured the public that even aspects of opposition to war will be part of the new presentation. This suggested incorporation of historical protest against war, reflects the AWM’s neoliberal ability to expediently tweak the Anzac mythology by appropriating aspects of conflict that were traditionally scorned and avoided. Sound familiar?

Over the last couple of decades, the AWM acknowledgement of Post Traumatic Stress Disorder (PTSD) and their novel accommodation of incorporating the soldier now as victim as well as that of the traditional hero, presents Anzac in what appears to be an enlightened critical manner and makes the Anzac narrative more palatable to the general public.

While a welcome change, this produces a reflective pause, but does not allow us to challenge war itself. Given the AWM’s record of apotheosizing war I cannot conceive of a dedicated new protest-against-war precinct within their sacred War Memorial which would cater for any genuine contemporary opposition to our involvement in war.

Following British and Canadian patterns an Australian War Artist scheme was established to record WWI through artists’ eyes at a time long before mobile phone selfies and video recording instantaneity. Will Dyson’s drawings of men at the front are sensitive if harrowing eye-witness aesthetically crafted accounts of the horror of the trenches at that time. The War Artist scheme resumed during the Second World War, the Korean and Vietnam wars and then, after an hiatus, was reintroduced in 1999.

Since its reintroduction in the postmodern era artists have fallen-in only too willingly to valorise our warriors. Artists chosen are commissioned to represent the Australian War Memorial or the Army Military History Section thereby compromising any independent protest. Their artistic ‘products’ are subsequently used promotionally to propagandise the AWM’s agenda. Viewed critically these artists are complicit apologists for Australian militarism.

In cultural terms, contemporary ‘activist art’ relating to war in Australia is not to be confused with the accepted understanding of protest, dissonant or resistance art. Historically art activism is associated with notions of challenge, proffering political alternatives or simple truthful enlightenment. But Australian artists describing themselves as ‘activists’ disingenuously enjoy the trendy status of an assumed oppositional stance, while in reality their art affirms and is aligned to the well-oiled cultural agenda of the political and military Anzac narrative.

An academic symposium War, Art and Visual Culture is being hosted in partnership with the Australian War Memorial in Sydney early next year. As a ’research project’; the intention is to “…increase scholarly and public engagement with the AWM’s collection of commissioned contemporary war art.”[4] As the AWM controls the narrative, this symposium will effectively confer an academic stamp of approval on those careerist artists (and theorists) who have and are participating in and theorizing on the government war-artist programme (as well as informal maverick outsiders involved) who define themselves as activists. Would these art practitioners accurately be described anywhere but in Australia as activist artists – I think not.

It is difficult, if not impossible within the current aesthetic rhetoric of activist artists’ work to locate any opposition to Australia’s continued involvement in war. Can one detect references to the effects of war on the peoples of the territories invaded by Australia? Or the maltreatment, cruelty, rape, torture and violent murder and destruction wrought by our servicemen and women? The darker forces of our democracy, akin to a not-so-distant fascism, have, in reality “demonstrated how politics can ruthlessly exploit the aesthetic dimension and harness it in the service of violence and destruction.”[5] And this is why there is now no public visual artistic protest to Australia’s perpetual involvement in violent wars.

Significantly the Australian public too has a poor report card on resisting official Government-condoned violence manifested as war. In 2003, around 600,000 Australians protested against the invasion of Iraq, since that time Australian society at large, even on being made aware of the effects on its servicemen and women via exposure to a military system through enterprises like the Invictus Games, have not protested with any public outcry or raised any objection or demand for the withdrawal of Australian Forces from War zones or, more to the point, the scaling-down, dismantling or, the total abolition of the current extensive military machine in Australia.

[1] “Let silent contemplation be your offering.” The words at the Flame of Remembrance, State War Memorial Precinct, Kings Park, Western Australia as well as the Hyde Park Memorial in Sydney.

[2] Artists Man Ray, Vladimirov Javacheff Christo and wife Jeanne-Claude were and are well-known for their wrapped sculptures.

[4] P2 (of 5) from the Speaker Confirmation and Agreement form. Curtin University. Western Australia

[5] Andreas Huyssen, The Terror of History, The Temptation of Myth in Twilight Memories – Marking Time in a Culture of Amnesia (NY: Routledge, 1995), 225 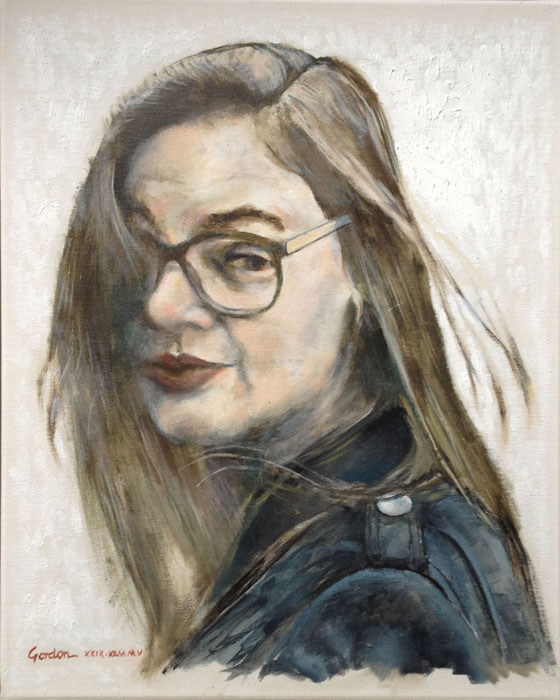 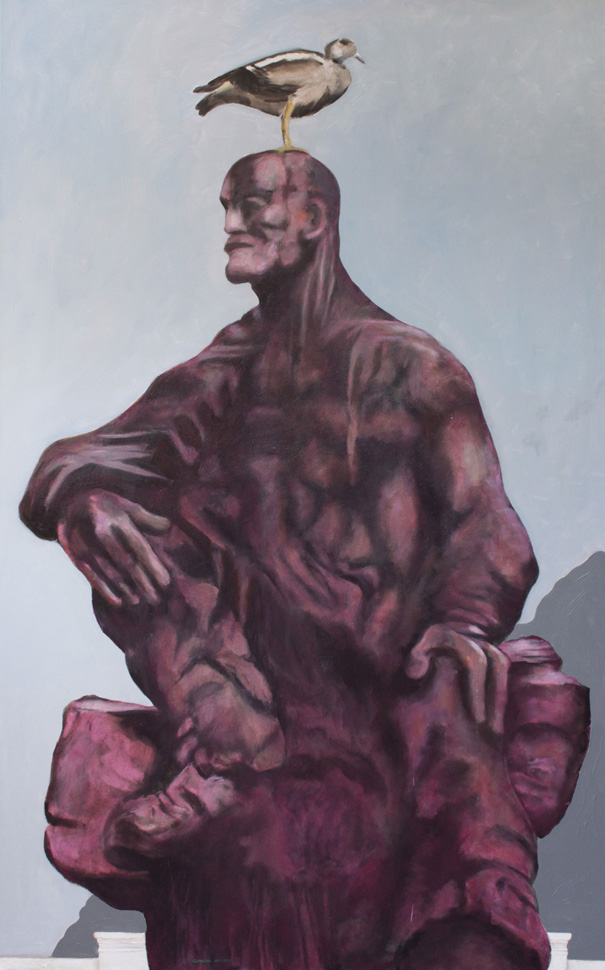 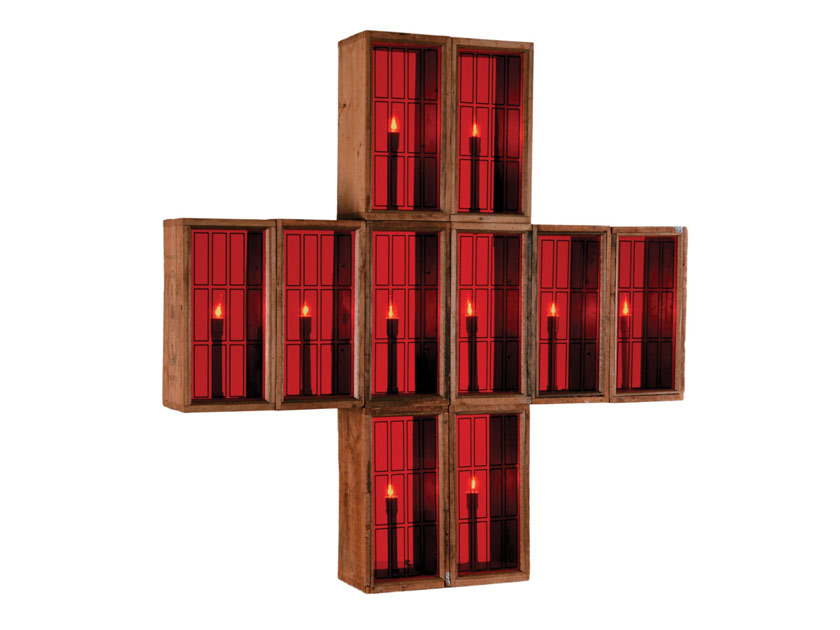